They say “Travel broadens the mind…”; very true, although in my case, it may also broaden the waist… Lol

I was recently lucky enough to tick one of the Biggies off my Bucket List – an Alaskan cruise. Made even more special, by travelling with some of my dearest friends and family. And the whole week was magic; throw in a few days at the end retracing my memories of 6 months spent living in Seattle and it was the holiday of a lifetime! 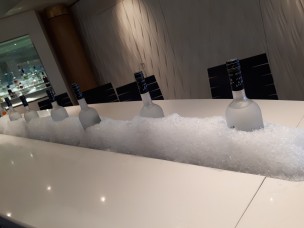 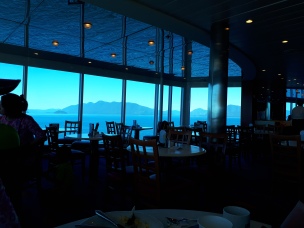 The cafe with an ever changing view

I’ve never cruised before, and I have to say, it more than met my expectations – and I didn’t even visit all the entertainments the cruise offered. Food wise, though, it ticked all the right boxes. The only problem was, being all inclusive, I felt obliged to try everything, and on some days I swear I never stopped eating! (Good thing, that modern day cruise ships are massive, and I easily fulfilled by 10,000 steps a day, just walking to and from the cabin..)

Early on, in the cruise, I was lucky enough to do a tour of the kitchens and hear from the officer in charge of food and beverages. Made me really appreciate the logistics of making 13,500 plates of food a day; as well as fulfil that nosy part of me, that likes to nose through a professional kitchen… All the food is loaded on the first day of the cruise (though  the fresh seafood topped up on port visits) – no popping to the supermarket for that forgotten ingredient; And all the breads, cakes and pastries, baked from scratch every day (The bakery runs 22 hours a day) 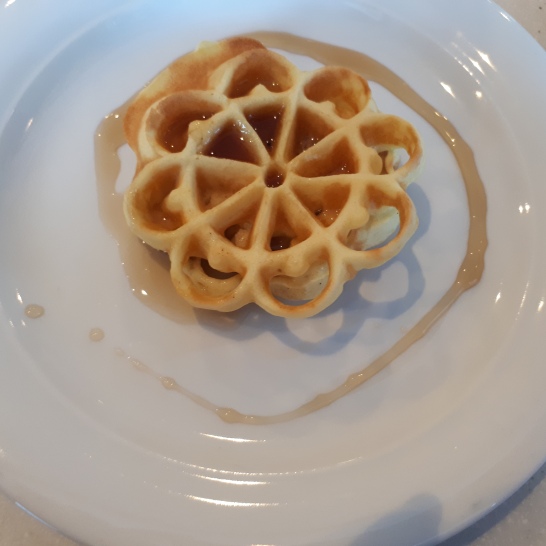 Morning Waffle, plated by my daighter 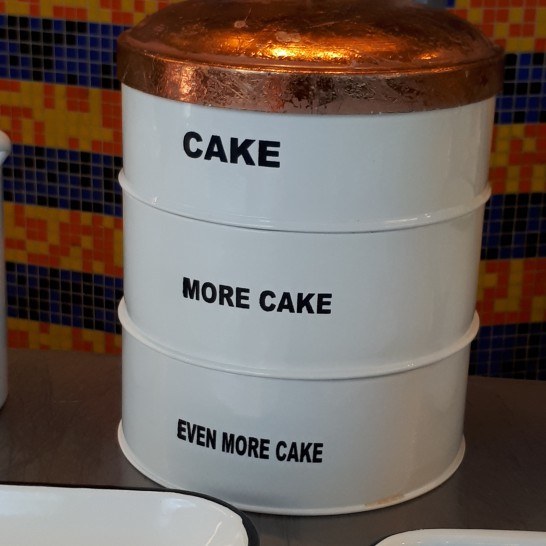 A cake tin I wanted to pinch

The dessert bar on the last day

As with most modern-day cruises, there was an all-day Buffet, in the casual café; each day a different country was themed; with a cake luridly iced to match!

Breakfast offerings travelled the globe with “A Full English”, the lighter “Continental – complete with freshly made croissant and Danish’s”; “The American – waffles, pancakes, caramelized bananas”, and “The Asian offerings of Congee, and other savoury morsels”..

The rest of the day, seemed to be an ever-changing banquet of hot, cold, build your own salad; or just soup and sandwiches…  Our group discovered that the pizzas – thin crusted, 4 different toppings, cooked in a pizza oven every 10 minutes, were delicious and became the go to for the youngest amongst us… We took to adding “Afternoon Tea” to the agenda – after discovering that the fresh scones were so light, and fluffy and served with lashings of jam and cream….. 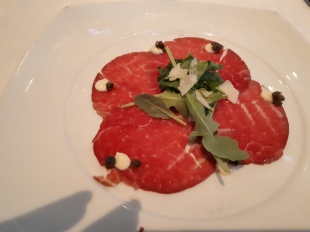 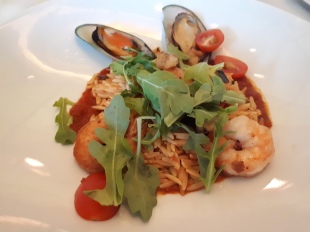 There was also, as part of the package, a more formal dining room, that served divine A La Carte offerings, including Carpaccio; Beef Fillet; Escargot and Crème Catalan – that orange flavoured Spanish version of Crème Brulee… It gave us a chance to “dress for dinner” and momentarily savour the essence of cruises of old, where you dressed for dinner every night, and hoped for an invite to the captain’s table….

There were also a few other speciality restaurants, which cost a bit more – but in the spirit of research 😉 I visited 2 of them and signed up for the King Crab lunch! 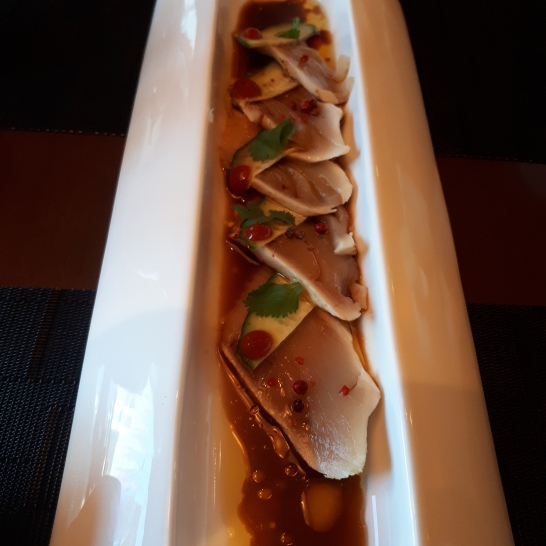 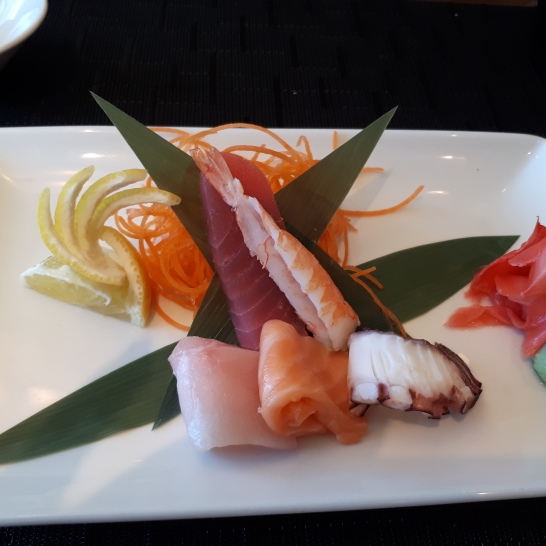 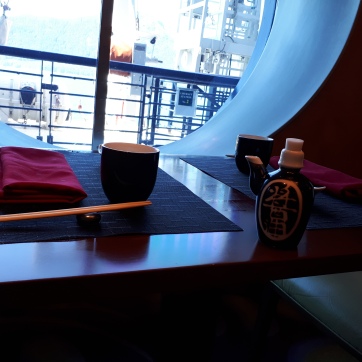 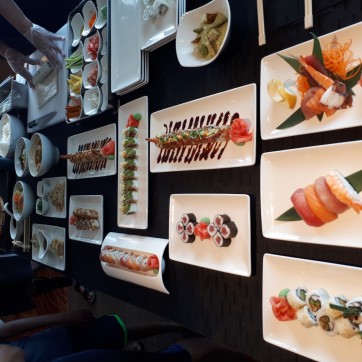 Miss Seventeen in her happy place

The first one I visited, to take my Sushi mad daughter to, was the Japanese Sushi bar for lunch. It ticked ALL her boxes, and the offerings were as beautiful as they were delicious. There is a quiet elegance about Japanese Cuisine, and it made for a delicious experience for both of us. For me, the highlight was the Truffled Albacore Tuna, while Miss Seventeen, very happy with her selection of Nigiri including Unagi (eel) and a first try of Tako (octopus).. 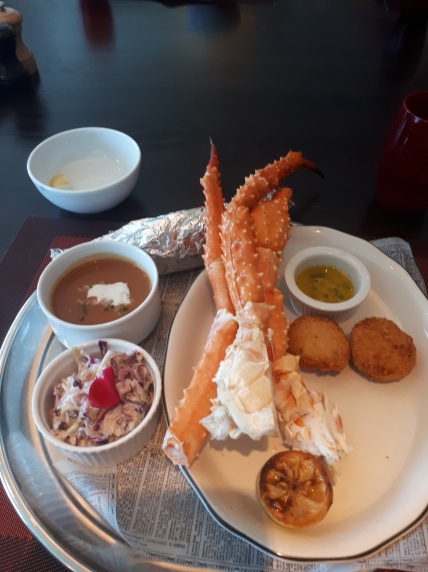 Most of us signed up for the special King Crab lunch – the most divine crab bisque, crab cakes, garlic bread, salad and the biggest crab claws I’ve ever seen! All manners lost, as we grappled with the red treasures, scooping and excavating the delicious white goodness from every nook and cranny… 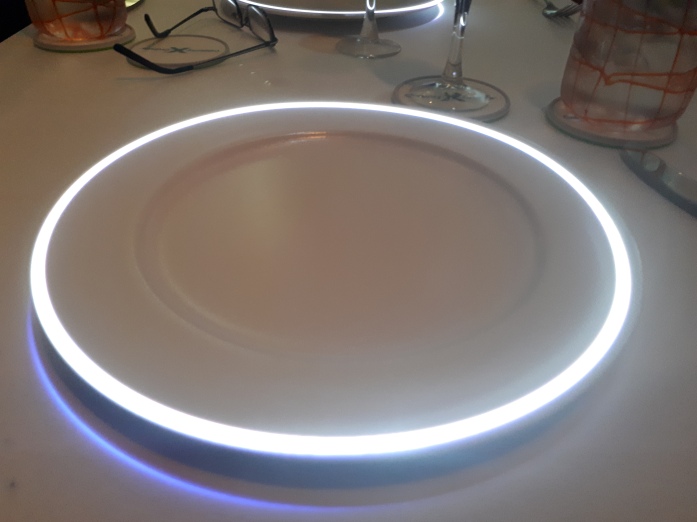 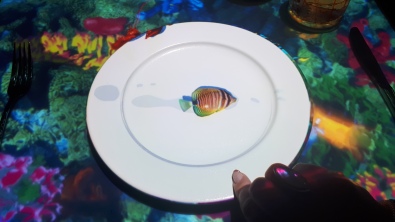 And the last Special dinner, was to celebrate the Birthday boy’s special day; and we ate at the most magic of places….. At Qisine we were treated to a dining experience like none other that I have experienced before… A 3D animated dinner – complete with the epitome of white table cloths; beautifully polished cutlery and glasses, and almost 1 on 1 service…. Each diner has a screen – well a portion of the table cloth circled with a plate sized white circle of light – and impeccably arranged cutlery…. And then the magic – the story of “The Little Chef” plays out for each diner; telling a tongue in cheek story of how he gathered the seafood and cooked it for the opening act of Seafood Soup; How he fought the lobster to get it on the plate – and had to hack off a couple of squid tentacles – to stop it stealing the prize catch… How he perfectly bar-b-qued the steak and felled the Broccoli tree – swatting away the pesky fly with your fork, before igniting it all with the petrol can left lying in the wrong place…. And the dessert told the story of scooping up Alaskan snow and serving it with a chocolate sauce – that he accidently stepped in…. And at the end of each mini movie; Voila! A plate of delicious food appeared, as if by magic, from the waiting staff….. (the dessert plates, all came with teeny, tiny chocolate footprints – making this cake decorator appreciate the sheer skill and attention to detail)….. A bit of fun, but the food? OMG! Perfect! Quite possibly the best steak I have ever had, and certainly the best cooked rare, as I prefer…. 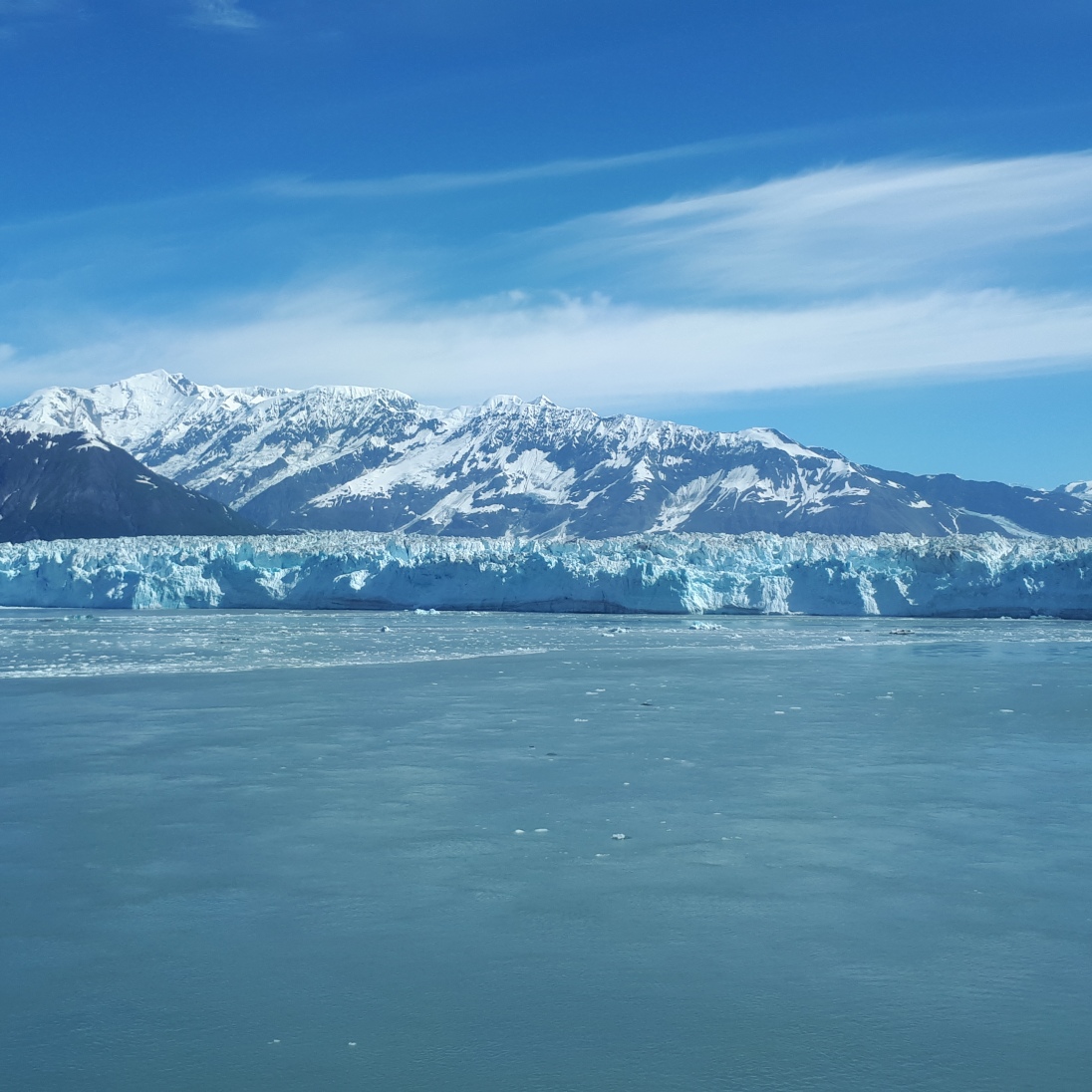 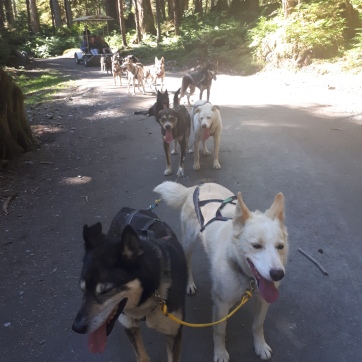 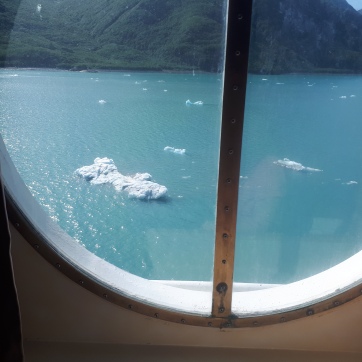 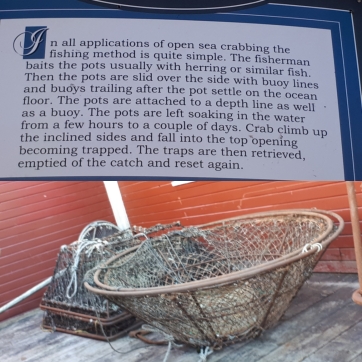 All this might make you think I did nothing but eat, but there was so much more….. Alaska, proved to be as stunning; peaceful; special and soulful as I had always imagined…., I dipped my toes in the icy sea; I was pulled by Alaskan Huskies – and along with Miss Seventeen – cuddled 5-week-old, black balls, of Husky puppy fluff….. I visited the Northern most point in my life – the Hubbard Glacier, who we were fortunate to view on a cloudless, stunning blue day! (A day, I had awoken to small icebergs floating by the cabin window)…. We spotted Bald Eagles soaring above us, and were entertained by the cunning crows that came aboard at every port… And some evenings, we just sat mesmerised by the sunsets that lasted for hours….. peaceful, and content… 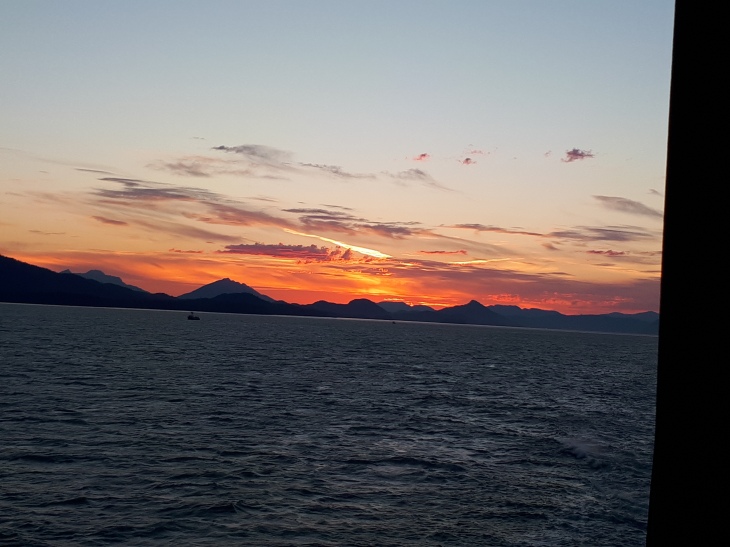 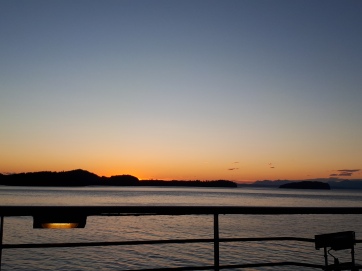 Sunset reflected in the windows of the Martini Lounge 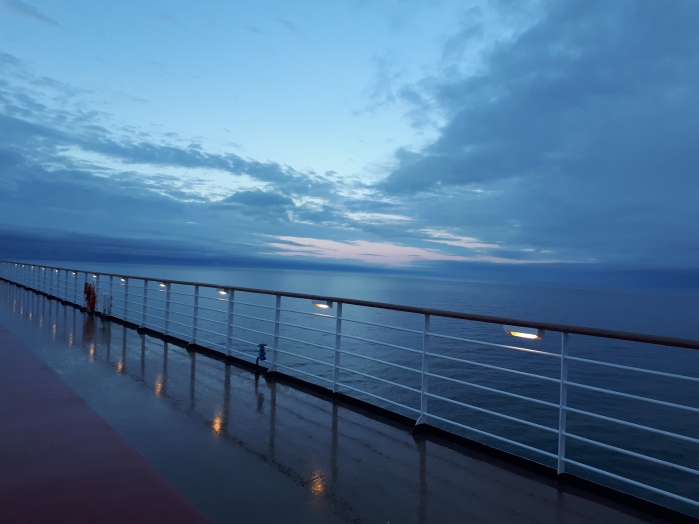 NZ Maori have a word for family – “Whanau”, which encompasses extended family – intergenerational and the “extras”, people who become family. And I think, for me, the BEST bit was having time to spend with people I consider Whanau. People who, due to diverse geography, catching up with, is never often enough… Just how do you measure time spent laughing, telling tall tales; toasting people; trying new things together… gathering at day’s end to share the tales of the day…? Having a  shared holiday, gives you that precious time, and I find. it is the same magic that is woven with shared meals…… The Stuff the greatest memories are made of….

One thought on “Ticking off the Bucket List – “Il Primo””