As the weather starts to cool, and I have to finally admit that Summer has passed, and we really are into Autumn, I thought I’d share these 2 marrow recipes.. It’s been a fabulous summer here this year, and most of my courgettes just bolted to Marrow, when I wasn’t looking. I found the lucky last in the garden over the weekend, and so thought some of you might have one lurking underneath the leaves so here’s two suggestions.

Marrow has a neutral flavour, and its skin is tough – which makes it a brilliant Carrier of both stuffing and its flavour.

I thought I’d go down the vegetarian route for this marrow, the Moroccan spices go well with the sweetness of some of the vegetables I’ve used. This means you could add it to a meal as one of the vegetarian options…. I had the cheese on hand, so threw it in, it gives lovely pockets of yum, I had smoked but any yellow cheese would do. Or even Feta.

1 large Marrow halved lengthways, and the inner seeds scooped out

Sprinkle salt over the marrow and leave to sit while you prepare the filling.

Preheat the oven to 200C

Meanwhile, heat some olive oil in a pan and add the onions and gently sauté for 5-10 mins until soft and starting to colour. Add the garlic and fry for a minute. Add the spices and fry for a minute and then add the peppers, Kumara, chickpeas , olives and lentils. Stir to coat in the onions and spices and then add the tomatoes, adding 1 can measure of water. Cover and cook on low for 15 mins, until the Kumara are just cooked. Taste and season with Salt and Pepper.

Once the filling is cooked, take the marrow and wipe with a paper towel to remove all the moisture that will have accumulated. Place both halves in a large roasting pan.

Gently fold the cheese into the filling and spoon it into and over the 2 marrow halves.

Cover with foil and roast for 30 mins. Take off the foil and then cook for a further 10 mins. This will brown the veges on top.

Just before serving, spoon the pan juices over the marrows. And you can serve with dollops of Greek Yoghurt for a creamy addition.

This will make heaps, but it keeps well and can be eaten hot or cold the next day.

Here’s another variation of a stuffed Marrow. This, time though you cut the marrow into roughly 10 cm slices, which you hollow out and fill with the stuffing mix and then bake until cooked. This method can be used with any stuffing and makes it easier to serve individual portions.

The Mexican flavours go well with the Marrow. I have added Chorizo to easily add the Mexican seasonings, but if you want to make it completely vegetarian omit the chorizo and add 2-3 T of a good Mexican seasoning mix. I charred the cooked corn on the gas element to give the dish a smokier flavour, but that’s also optional

This makes either a good side dish, or an entrée. And any leftovers make a good lunch serving.

I use brown rice, because we all like the nutty flavour, and I find in this dish it stands up well to the cooking process and gives a good texture. But, if you only have white rice, then that will be fine too.

(3T Mexican spice Mix – optional if not using the Chorizo)

Stems of 1 bunch of coriander – keep the leaves for garnish

1 cooked cob of corn, with the kernels stripped

Cut your Marrow into 10cm slices and hollow out the seeds – you should be left with rings. Generously salt the insides and leave to sit.

Heat some Olive Oil in a pan and add the chorizo, cook gently until the oil starts being coloured a reddish colour by the paprika in the Chorizo and then add the onions. Fry on a low heat for 5-10 mins until the onion has started to brown and then toss in the chopped coriander stems and peppers and cook for 2 minutes. This is the stage to add the Mexican spice mix if using and fry off for a minute.

Take off the heat and stir in the rice, beans and corn.

Wipe the Marrow rings to remove the salt and any liquid that has oozed out and Place the cut Marrows end down and stuff with the filling, packing it in. If you have some left over spread it around the gaps between the marrow. Top each one with a couple of slices of chilli. Mix the canned tomatoes and water and pour around the marrows. Grate the cheese and sprinkle over the top of each marrow.Cover with foil and then bake for 45 mins and then remove the foil and cook for a further 10, for the cheese to start browning. You may want to grill it for 5 to really toast the cheese. 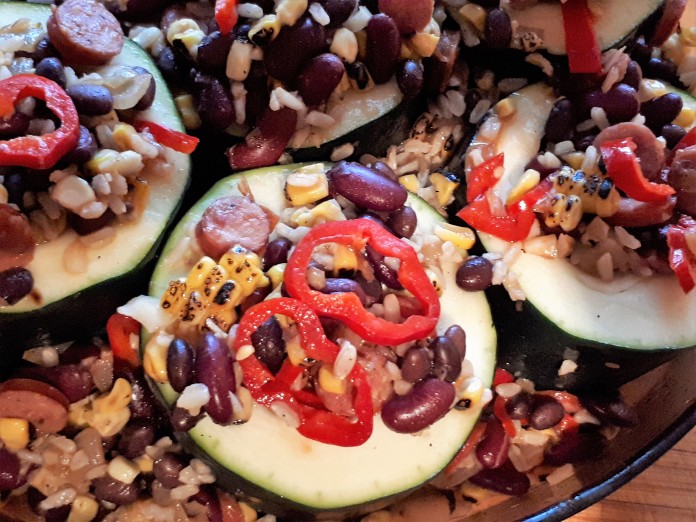 Serve 1-2 Marrows per person as a starter, or one as a side to a main. Makes a good lunch dish and keeps well for the next day.

As I said before you can chop and change the filings and shapes, but these are a good way of using up those rogue courgettes that escape notice and grow into Marrows.