Every journey starts somewhere, and my food journey definitely started as a child – as most of them do.

I have spent the last week helping my Mum pack up the old family home, and so have been reminded of my family roots, which are firmly entwined with my food roots. I come from a long line of great cooks, and my Polish heritage is based on “always room for one more at the table”; “always making people feel welcome”; serve big hearty portions! But its more than that. My Mother and Grandmother were Polish refuges who spent years in a refugee camp in Kenya, and so making the most of what you had, stretching food out and using up leftovers with minimal waste, was the background I grew up in. And cook things that are available – ie seasonal produce. All things that shape how I cook and view food.

Most of my childhood was spent in NZ, in the 70s, which it’s safe to say, was a gastronomic desert. My poor mum, from a Cosmopolitan background, arrived to find a country where there was white bread… and brown – which was just white bread with the bran added. Whole grain bread had yet to make its presence felt. Where Olive oil could be found in small glass bottles, next to the Cod Liver Oil in the Chemist; and where “Pizza Pie” – was a scone dough base topped with canned spaghetti, ham, pineapple and cheddar cheese.

It certainly wasn’t all bad though, we settled in Hastings, known as the Fruit Bowl of New Zealand; and summers were spent feasting on strawberries, peaches, cherries to die for

and fresh veges bought from the growers – the very thing we all aspire to be able to do now. End of summer was a hive of jam making and bottling to preserve the summer bounty. And this week I got to the legendary Hawkes Bay Farmers market where the 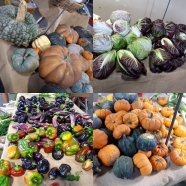 Veges at the Farmers Market

food is fresh and made with care, and you can talk to the growers and producers – just like Mum did back in the 70’s; its funny how things move in circles.

I was lucky too, that a combination of her Polish Heritage and the fact my father was born in India, meant that my childhood differed from my friends with curries, Polish food, and an openness to explore some other food culture.

My friends, by and large, ate that traditional Kiwi fare, based on the English standard of meat, potato and 2 vege. And the vege were mostly boiled until they were a uniform grey.

My Grandmother was A Baker! After all this time, I still recall the Easter treats; the Christmas offerings and her apple slice? Second to None! Her parties amongst the ex-pat Polish community were legendary – tables groaning with food, hospitality oozing in every corner, and ending with singing – always the singing (something my English father was slightly less impressed by).

Recently I helped my daughter do a project about her grandmother’s childhood trip as a refugee, and in doing the research, came across a photo from Easter at one of the refugee camps in Kenya, and there it was, dirt floors and the tables dressed in impeccably white table clothes and groaning with food – explains my need to over-feed.

The week was spent sorting through 40+ years of accumulated stuff… Including some dishes that were for specific foods; the large saucepan that was for making Mum’s curry and the serving bowls that Dad bought accidentally – instead of the ones Mum sent him out for.. (ones I had a sneaky fondness for, maybe because of the story behind them…) Some of the dishes will go with her to her new home, some have come home with me, and the rest will be split between my siblings – or sent to new homes via op shops. Time for new families to make memories.

And in between packing and sorting there was chances to relive meals and occasions, and I find that typical of my view of food – it’s the glue that holds events and people together. There were also stories of those meals that were memorable for all the wrong reasons – the time the cabbage rolls ended up on the carpet when the handle of the dish failed…

The undercooking of some and the definite overcooking of others. Or how, when being given a Beef Fillet, Mum served a ginormous Beef Wellington to her very impressed guests at a 1970s dinner party. Dinner parties, where it was my job to help put out the glasses, lay the table – and put out the cigarettes, lighters and ashtrays… (yes times really have changed.)

Then I came home to find the next generation perfecting roast potatoes and starting to develop their own style..

It has been a wonderful trip down memory lane, and I have been reminded that food does not only feed the body, but the soul too….

2 thoughts on “My Potted Food History”